Following the success of the event of March 31, 2018,
the Autistan Diplomatic Organization proposes,
each year from 2019,
the concept of “Autistan Day“. 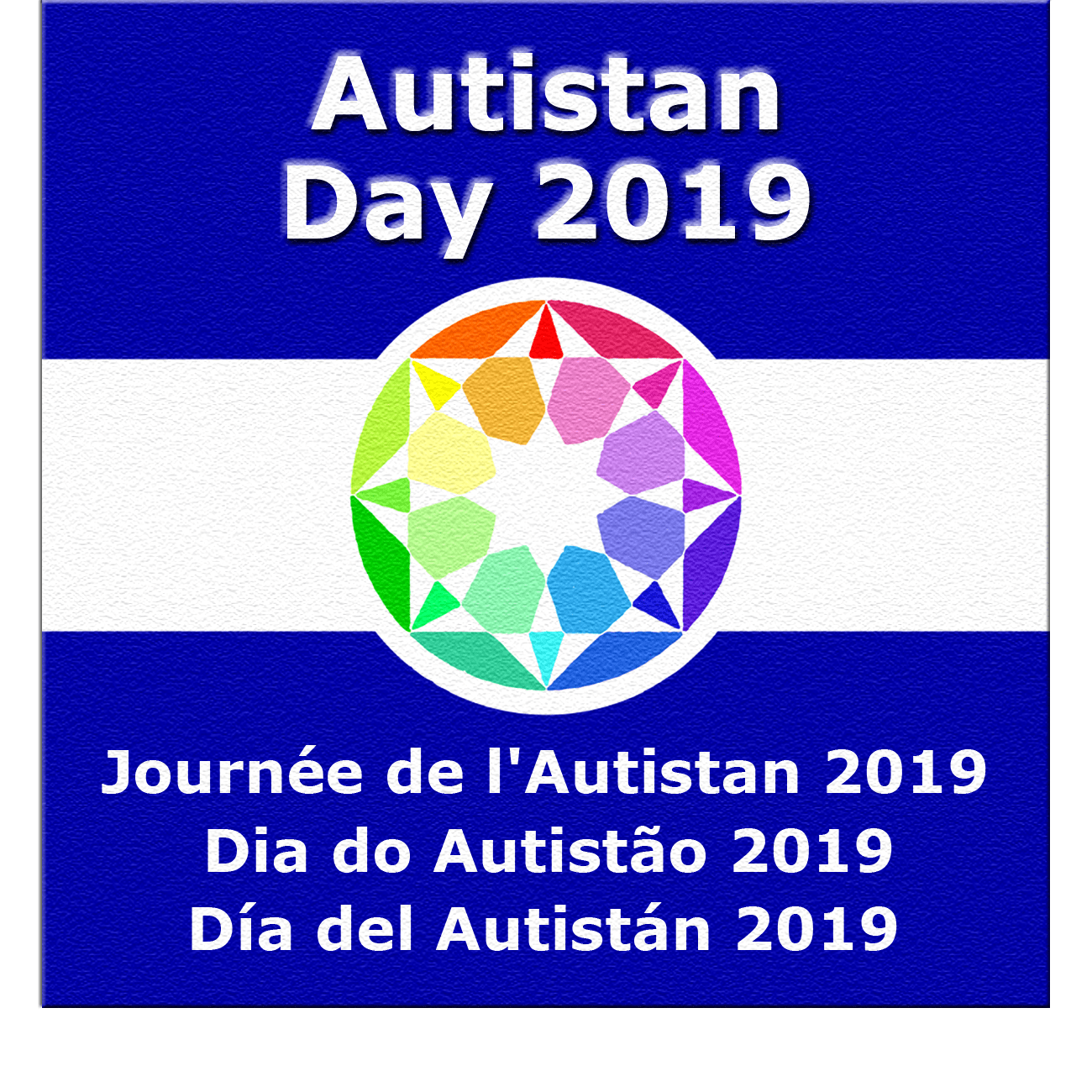 This is a concept:

Groups and organizations of autistics or autistic parents, or others, who organize events to defend the autistics and autism around April 2, may decide to organize their event in harmony with the Autistan Day.

C1- (Of course) Organize awareness actions about autism for the public, in the public space (physical, or virtual on the Internet).

C2- Use the flag of Autistan (or elements of the flag: in this case, consult us to check if it is appropriate), with a link to the present page (https://autistan.org/en/autistan-day/) in your communication (previous, during the day, and posterior).

C3- Use the title “Autistan Day” (which does not prevent the use of other titles, association names, etc.)

C4- Verify that the messages, presentations and publications of the event are respecting the Fundamental Rights of Autistic people according to the Autistan Diplomatic Organization (https://autistan.org/en/8-rights/).

C5- Verify that the messages, presentations and publications of the event are consistent with our vision of autism (https://autistan.org/en/9-our-explanation-of-autism/), in particular by never using a “defectological” approach to autism.
– Examples of incompatible messages :
— “ease”: no, it’s a natural biological difference (like being left-handed, dwarf or albino).
— ““: No, autism is autism, and the difficulties associated with autism are not autism;
— “Fi“: no, but, on the contrary, fighing for autism… (For understanding, respect, use and respect of autistic characteristics and qualities);
— ““: no, but rather overcoming the difficulties (especially those imposed by the social environment), respecting the autistic nature of the person;
— ““: no, but “apprenticeships” and “adaptations”, yes. (The word “therapy” carries an idea of “medical treatment”, even if it is used figuratively.)
– If you manage to have people understanding these essential fundamentals in your event, this will be very useful for your audience, and this will also be an example of the usefulness of our Organization.

C6- Send us the links of the (previous and subsequent) publications concerning your event, mentioning the Autistan (with at least one link to Autistan.org), so that we can publish them too. (contact@autistan.org)

C7- Do not use the “ribbon” (as for HIV) in the event’s communication.
– Explanation: Autism cannot be compared to HIV; we are opposed to the “catastrophism”; these ribbons are often about deadly and very sad plagues, and autism has nothing to do with it; we do not want to be equated with things that are saddening and scary, and that everyone would like to get rid of.

R1- If possible, invite an Ambassador of Autistan or another member (or sponsor, or supporter) of our Organization.

R2- If possible, try to harmonise the local event with other events organized by other associations or groups as part of the “Autistan Day” concept.

R3- If possible, do not use a “puzzle” in the communication of the event.
– You can use only the minimum, when it is impossible to remove, for example in case of presence of “puzzle” in the logo of the association that organizes.
– Explanation: For autistic people, there are no “puzzles” or “headaches” about autism: it is a natural thing for us; it is on the contrary the very absurd and harmful functioning of the non-autistic social system which deserves to be corrected.
– The organization that created this concept of “puzzle” is not an organization of autistics and did not involve autistics in this idea. We do not know any autistic who likes this concept of “puzzle”.
– More explanations : http://www.judyendow.com/advocacy/goodnight-autism-puzzle-pieces/ and https://the-art-of-autism.com/the-autism-puzzle-piece-a-symbol-of-what and https://web.archive.org/web/20160220153444/http://unpuzzled.net/2012/05/02/i-am-not-a-puzzle-from-reports-from-a-resident-alien/

R4- If possible, avoid illumination of monuments in blue, and in any case do not refer to the title “Light It Up Blue”.
– You can use the blue light as you wish, but avoid copying the concept “Light It Up Blue”.
– Explanation: This concept is part of the “defectological” and “alarmist” approach of autism that uses ribbons and puzzles.
-Information to understand better : some autistics, tired of this approach that does not respect autistics nor autism, invented a reverse concept: Tone It Down Taupe.