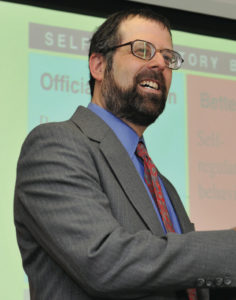 Born in 1961, Stephen Mark Shore is an autistic, and a professor of education (autism) at Adelphi University in New York ;
he makes presentations and lectures about autism, in many countries ;
he also wrote several books about autism ;
and he is now the first Ambassador of Autistan in the USA, officially since october 2016.